Click here to view a detailed version of the map.

Aiguillon is the fourth map of the game, it was released in April 9th 2013 with Patch 1.17. It was exclusive to the Steam version of the game until the release of Awesomenauts Assemble! for the PS4.

Legend tells the story of a giant cranky porcupine that wandered through space. Furious at the sun for burning his eyes, he charged and killed both the light and himself

His prickly remains now orbit the dead sun and gave home to the Kremzon, a crude and devious species that spend most of their time in bustling cabarets and smokey cafés. Aiguillon's thorny rings conceal a mythical temple, rumored to hold the power of invisibility. 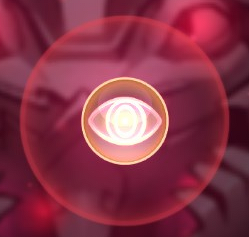 Aiguillon has a special pickup called the Stealth Orb. It grants 20 seconds Invisibility to any 'naut that touches it, and respawns after one minute. The Orb appears shortly after a match begins, and will remain there until it is picked up.

As of Patch 2.8, players can now see a bar indicating how much time is left on the Orb's invisibility effect (see below).

There are 6 Creeps on the map. One is behind the team wall for both teams and two are in front of each team wall. Killing them will drop a small Healthpack that restores 250 Health, and grant 5 xp, plus 3 Solar.