Clunk is a robot suffering from anger management issues. He's saving up money to pay for therapy but keeps losing it due to damage compensations. Originally created as part of a robot army to combat an immensely powerful super villain terrorizing the outer star systems, Clunk found himself without a job when the villain accidentally died of a nasty bacterial infection before the robot army was completed.

This was actually a blessing in disguise for Clunk, since he was never designed to return in one piece from his mission. He was refitted to do standard house-keeping work, but soon found himself out of work once more as he kept blowing aggression inhibitors and subsequently went into immensely destrucive tantrums.

Eventually, Clunk signed up as a mercenary to do what he is best at: wrecking things. He found that finally giving in to his aggressive nature has given him great inner peace. Nowadays he takes great pleasure in jetting around the battlefield, blowing up in peoples' faces to the sound of heavy metal.

▶️"You cant kill the Metal! - Reference to the Tenacious D[1] song The Metal[2].

▶️"The metal will live on!" - Reference to the Tenacious D song The Metal.

▶️"Clunk, all wound up and ready to go!"

▶️"Clunk, all wound up and ready to go!"

▶️"Struck you down with a vicious blow!" - Reference to the Tenacious D song, The Metal

▶️"Target Terminated!" A possible reference to the movie Terminator[9]

▶️"Detecting much win in this sector!" - A reference to a Star Trek image macro.

▶️"Clunk terminated!" - A possible reference to the movie Terminator. 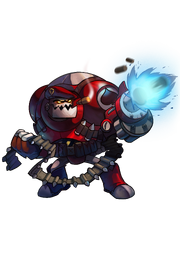 "A team of unruly mercenaries is given the assignment to take out a corrupt military leader and a rogue operative on a Latin American island. Their leader: Expendable Clunk! Double the action, triple the explosions and a-ten-hut for the Master of Metal!" - Official Steam Store description.

With this skin, Clunk has a beret, cigar, and an ace of spades symbol on his shoulder. His eyes are changed to have more of an "angry" look and his jaw is darkened to make it look like a beard. His arm cannon is replaced with a grenade launcher with a chain of bullets attached to it.

Explode has the image of a skull (which also has a beret) and the Missiles are replaced with big bullets. 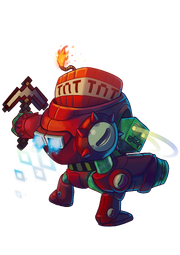 "It was a dark and stormy night. You run around the Awesomenauts base, but too late you realize that remote spot in the back where you forgot to place a torch. You look around frantically but can’t spot a thing... until... SSSSSSSsss BANG! Creeper Clunk is all up in your grill!'

This new skin for everyone’s favorite Awesomenaut, Clunk, can’t be bought or downloaded anywhere! The only way you can get it is to hunt one down in-game and kill it dead!" - Official description.

This skin gives Clunk the appearance of a Creeper from Minecraft piloting an armour suit. His missile cannon now has a square shape. He also has a Minecraft TNT crate on his back and a pixelated pickaxe on his hand.

His jump has square smoke effect, Vacuum Bite becomes pixelated, Explode has the Creeper explosion SFX with an image of a Creeper's face on it, and his missiles are replaced with blocks similar to the ones from Minecraft. He has a new teleport animation where the block of TNT on his back flies into the air and spins around. 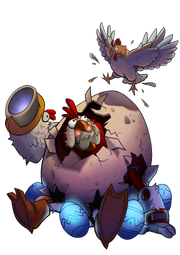 Note: This skin cannot be bought separately. It is part of the Awesomenauts - Costume Party 2 DLC Bundle.

This is skin is a chicken costume for Clunk. Only his face is visible under it. It has a zipper and a yellow chicken badge on the chest. The arm cannon is replaced by a chicken head. His eyes are now round instead of angry, similar to his eyes prior to his sprite update in 3.4.

Explode has the image of a chicken head and he clucks right before the explosion. His missiles are replaced with eggs which explode into yolk.