Rocket was a war hardened soldier fighting for the Scargi army. Known for his explosive temper he fought bravely among the Scargi until he actually lost his head while furiously cleaning his rocket launcher during the siege on the arachnid planet Smertzspin. Rocket being a Galspitter, known for their cursing and vulgar language was given an advanced head prosthetic with profanity filter. But more importantly he was promoted to commander of the security detail of the Scarg emperor Pierre Feu Darret AKA "Unstoppable Pierre". Rehabilitating in the royal court the commander found a new team of misfits to command, who he would train to become the Rocket Renagades.

Until 3584 when disaster struck. The team of four crack military court members was sent to prison by the Scarg emperor for the audacious crime of planning to salt his dinner. A highly deadly substance for the sensitive snail-like Scargos. The renegades were thought to be planning an assassination when they were actually just being caught eating fries they had salted with the salty seals they illegally had been hiding in their quarters.

Before the Scarg imperial guards could apprejend them, Rocket told them to go "Zork" themselves and they dispersed into the far reaches of the galaxy. Today, still wanted by the Scargos, they prepare to strike back at those who wronged them. They have the weapons. They have their mission. All they need now are allies.

▶️"Sure! You wanna go up against a commander?"

▶️"Some assistance, if you will?"

▶️"Attack that point! Then onto step 2!"

▶️"Time to invent our way out of this."

▶️"First we defend this strategic position!"

▶️"Alright, we need some stuff to build a tank!"

▶️"Welders! We need tons of welders!"

▶️"Anything you've got lying around!"

▶️"Back to the drawing board!"

▶️"Go in with a few friends, roll out with a tank!"

▶️"Hold the fort! Time for some upgrades!"

▶️"A plan is about to come together!"

▶️"I love it when a plan comes together!"

▶️"Here's my plan: We shoot them all with rockets!"

▶️"I've come up with a beautiful plan!"

▶️"We're putting the band back together!"

▶️"Even my rockets are on the jazz!"

▶️"'What a brilliant commander!' Is what people frequently say."

▶️"Loosing my head was a real punch to the face!"

▶️"Listen up! I have a twelve-step plan for us!"

▶️"Alright! I've turned it into a six-step plan."

▶️"The plan's coming together! I love it!"

▶️"Another volley of rockets coming up!"

▶️"It doesn't get nicer than this!"

▶️"There will be order in my kitchen!"

▶️"Keep the kitchen clean! Or I will kill you!" - A reference to Ratatouille.[1]

▶️"You're the fast food of fighters!"

▶️"Time to spice things up!"

▶️"They have the latest quantum cooker?"

▶️"It's the season for seasonings!"

▶️"We meet in the kitchen!"

▶️"We head for the fridge!"

▶️"I couldn't possibly share my cooking secrets with you!"

▶️"They call me the prince of pastries!"

▶️"Dirty secret: I love to powder myself with flour."

▶️"I should start my own cooking show!"

▶️"'Microwaving With Rocket Chef' has a nice ring to it!"

▶️"Don't put that pineapple up top!"

▶️"I wouldn't eat that if it grew legs and walked into my mouth!"

▶️"Is it time for fifth luncheon already?" - A reference to Hobbits[2] from The Lord of the Rings.[3]

▶️"I love it when a meal comes together!"

▶️"This is my meal ticket!"

▶️"I have a tiny chef that tells me what to do!" - A reference to Ratatouille.

▶️"You taught me everything I know, monsieur Septime!" - A reference to Le Grand Restaurant[5].

▶️"Whoa! There's still plenty of meat on that bone..."

▶️"...nutmeg! Nutmeg, Herr Müller!" - This set is a reference to Le Grand Restaurant

▶️"You're all burgers on my barbecue rack!"

▶️"My fellow Renegades! You must be hungry!"

▶️"How about some soup to get a Rocket's Renegade going?""

▶️"I'm not wasting my cuisine on a rogue renegade!" 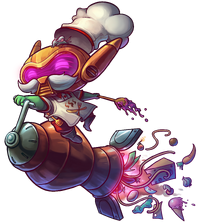 Serving the Scargi Emperor was one of the happiest times in the life of Commander Rocket. Not only was he allowed to lead his Renegades into battle in service of the Scargo race, he also spent a lot of his time in the palace kitchens to enjoy his third-greatest passion: cooking (the others being fighting and cursing). None of the Scargo cooks initially thought much of the little guy, but with a little help from a tiny companion he found in the pantry, he quickly turned out to be able to create beautiful banquets and majestic meals from the simplest ingredients. They gave him full access to the kitchen on just one condition: never to bring any salt into the kitchen, as it was a hazardous substance to the snail-like Scargo.

When the Renegades were driven from the Scargo forces, it not only meant the Commander was left without an army, but he also found a new hobby: hunting down the Scargo emperor! Sometimes he still dons his old apron though... just to remind him of happier times.

This DLC contains a custom skin for Commander Rocket in Awesomenauts. You need to have Commander Rocket available as a playable character in order to access the skin in-game. Owning this skin will also unlock the special portrait for use in-game. This skin contains a fully customized voice set. - Official Steam Store description.

This skin gives Commander Rocket a chef costume, which includes a white outfit, a chef hat (which changes in style depending on which team you're on) and a white apron. He is no longer smoking a cigar and holds a wooden spoon. His rocket launcher is replaced by a giant pepper mill that fires tomatoes (on red team) or purple bell peppers (on blue team). Rocket Launch's projectile is a giant sausage and Laser Trap looks like an egg timer (the lasers themselves having spaghetti for special effects, including Box Of Cirean Cigars). All the abilities have unique sound effects. When teleporting, a mouse comes out of his hat and squeaks (this is a reference to the movie Ratatouille[7]).

Showcase starts at 0:25 in the video.

Rocket was a war hardened soldier fighting for the Scargi army, well known for his explosive temper, vulgar language, and love for explosions. He lost his head in an unfortunate accident, but was given an advanced head prosthetic with profanity filter. Most importantly: he was promoted to commander of the security detail of the Scarg emperor Pierre Feu Darret AKA “Unstoppable Pierre”. Rehabilitating in the royal court, Rocket found a new team of misfits to command, and he trained them to become Rocket Renegades.

Disaster struck a few years later, and the team of four was sent to prison by the Scarg emperor for the audacious crime of planning to salt his dinner - a highly deadly substance for the sensitive snail-like Scargos.

During a shift of the guards, the team quickly outsmarted the slow Scarg prison guards and Rocket told them to go “Zork” themselves. They hijacked an interplanetary vessel and dispersed into the far reaches of the galaxy.