Using her mastery in Aqua-fu, Dizzy fooled the Scarg prison guards with her water clones and escaped along with her team. After being separated, she went back to her home planet: Ribbit IV, with the plan to visit her family and revitalize her singing career.

Dizzy decided to form her own girl band, called the Dizzies, with two of her water clones. In no time she conquered the Universal Music Charts and toured all across the Galaxy, while angering some concert hall owners due to her 'explosive' performances.

After a popularity poll showed that one of the clones, Fizzy, was way more popular than Dizzy a fight erupted between the two, causing Fizzy to start her own successful solo career. In a fit of rage caused by the betrayal, Dizzy left the band and redirected her anger into vandalizing the modern streets of Ribbit IV with graffiti. Before being caught, she was calmed by an old friend who presented her with the perfect plan to both clear their names and redirect her rage. She now joins her old friends and follows her cousin's footsteps into joining the Awesomenauts!

Feel me croaking out the bass

My style is funky and my hairdo is ace

Even by clones I never could be replaced

Dizzy's owning all of Space

Only one waterfall left for me to chase

Keep your distance, or my groove blasts you away

You once paid big for my concerts, now for standing in my way

From the stardom, the betrayal, and the rage

I will be starting some aqua-fu rampage

Kickin' your face black an' blue

Singin' all high notes on cue

Bodies will dance till soaked

Minds will be fiercely stoked

Here's my rap of life in prison, that was back in the day

So I revitalized my act, I was the queen and I reigned

Our act exploded and success was pumpin' through our veins

Until one screwed me big time, causing me emotional pain

I started spraying graffiti until my heart filled with shame

Said hey you gotta stop this nonsense hon', it's black'nin' your soul

And he was right, this crap was leaving me completely distraught

I switched career and let my rage roar with the Awesomenauts

▶️"Time to hit those charts!"

▶️"They ain't getting through our defenses!"

▶️*singing* "All the kids with their new things..."

▶️"Think I'm tempted by some bling?"

▶️"Oooh! I love me some upgrades!"

▶️"Where did that blowfish go?"

▶️"I was chasing waterfall and suddenly SPLASH! Wet butt!" - A reference to the song Waterfalls[2] by TLC.[3]

▶️"Don't get on my wrong side, I've got like a million big brothers!"

▶️"Aqua-fu is the essence of life!"

▶️"I'm not gonna spend my life being amphibian!"

▶️"The Dizzies were slick, back in the day!"

▶️"Don't go chasing water clones... 'cause they'll explode on you! Hah!" - A reference to the song Waterfalls, by TLC.

▶️"My explosive performance made a lot of people mad!"

▶️"Bustin' up concert halls wherever I go!"

▶️"I started singing when I was still a small tadpole!" *giggles*

▶️"Unobtainium record!" - A reference to a fictional metal from the film Avatar.[4]

▶️"Thank you! You really love me!"

▶️"I'd like to thank my producer and my bro Froggy G!"

▶️"Another award for the mantlepiece!"

▶️"Ulp! You're not putting me on the barbie, are you Smiles?"

▶️"We're putting the team back together!"

▶️"My homies! What are you doing with the enemy?"

▶️"Oh, is this a fighting drill? I love drills!"

▶️"You won't see me coming until you're dead!"

▶️"I can clearly see how lame you are!"

▶️"Careful! You're gonna step on your own clumsiness!"

▶️"We gotta ninja ourselves outta this!"

▶️"Before you know it, I've evaporated!"

▶️"Time for some real cloak and dagger stuff!"

▶️"Time for balancing on a knife's edge!"

▶️"I'm the waft of air that gives you a running nose!"

▶️"I'm the leaky tap that drives you crazy at night!"

▶️"I'm the shadow in the corner of your eye!"

▶️"I'm what you think you saw in the mirror!"

▶️"I'm wherever you least expect it!"

▶️"I'm the unsettling noise when you thought you were safe!"

▶️"I'm the cinder that sets the forest ablaze!"

▶️"I'm the croak of the earth before it swallows you whole!"

▶️"I'm the invisible ink when you need to write something down fast!"

▶️"I'm the enemy you never knew you had!"

▶️"I'm the laughter when you finally screw up!"

▶️"There's method to my murder!"

▶️"The mystery flows through me!"

▶️"Splitting seas in half is child's play!"

▶️"I can lift rocks with nothing but the sweat on my forehead!"

▶️"Let's rhyme together when this is over, Froggy G!"

▶️"Want me to pour you a stiff drink, Commander Rocket?"

▶️"Commander Rocket! You have a mission for me?"

▶️"You may own the swamps, but I control the shadows, Smiles!"

▶️"The tides are fortunate that we fight together, fellow Rocket's Renegade!" 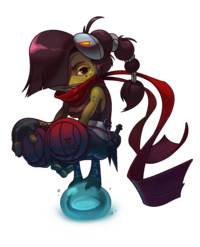 When the Aqua-Fu calls, you answer. Nowadays the Aqua-Fu also tends to send a text message when it can't reach you by phone.

When Dizzy got the text she set off on a pilgrimage to the Aqua-Fu home nebula: the Waxxon spiral. There, she met with Noodle Smiggs, a man with a terrible name but mythical Aqua-Fu skills. She spent three gruelling years in training, lifting rocks with nothing but the drops of sweat on her forehead, washing dishes while manipulating the flow of water from across the room, and cleaning spaceships down in the spaceport for some extra cash.

After years of training, Dizzy was introduced to the secrets of the Scrolls of Xi-Pang and her training entered it's final stages. The scrolls had given her untold insight into how Aqua-Fu Masters were all that stood between hidden, unspeakable horrors and the people of the galaxy, and the role she was set to play in events yet to unfold. She had become Kunoichi Dizzy, Master of the Aqua-Fu.

This DLC contains a custom skin for Dizzy in Awesomenauts. You need to have Dizzy available as a playable character in order to access the skin in-game. Owning this skin will also unlock the special portrait for use in-game. This skin contains a fully customized voice set. - Official Steam Store description.

This skin gives Dizzy the looks of a ninja. Her hair is tied up in a braid instead of dreadlocks and she has a small mask to the side of her head. She's wearing a black kimono and a red/blue scarf and her gloves are slightly more detailed. She wears a kung-fu red/blue belt around her waist and is missing her water tank. Her feet are wrapped in bandages.

Her fish gun is replaced by some sort of hard shell monster with sharp teeth and glowing eyes. Her Multi Dash has unique sound effects, and the grafitti effect is replaced by katakana and a trail of leaves and a log. The hit area of her Explosive Clone is shaped like a gong and the skill itself plays a gong sound when deployed. Blowfish Nozzle has the appearance of kanji that says "bomb" and leave a trail of leaves upon exploding.

Her teleporting animation is slightly altered, as she puts on a mask while it is taking place.

Showcase starts at 0:32 in the video.