When playing in Battle, you can have 2 players connected via LAN or Steam to play, or on the same computer, before searching for a match. Everyone chooses their Awesomenauts in the standard way, and the game begins when the host starts the game or the timer reaches 0 seconds. If there are open spaces filled by bots when you begin the match, a random person online can join from the Quick Match option. To prevent this, you would have to start a Private Match. In this mode, maps are selected randomly. The outcome of Battle Matches will affect the player's ranking in the leaderboards.

Custom match is a match type which features four game modes: Traditional Awesomenauts, Team Deathmatch, Randomnauts and Instagib. The difference is that, unlike other game modes, "custom match" allows the host to alter a great number of in-game settings prior to the start of the match. The outcome of Custom Matches will not affect the player's ranking in the leaderboards.

Some of the current customization options are:

More customization options will be added in the future.

This is the most commonly chosen match, as to play a standard match online against random people you have to quick join one. You cannot add anyone from your Steam Friends list or over LAN in a Quick Match. If you search for a game but every one is full, you'll automatically create a new match, with you as the host. The game will start with bots on every team, which will be replaced by real players if they connect. In this mode, maps are selected randomly. The outcome of Quick Matches will affect the player's ranking in the leaderboards.

This mode is completely offline - no players can connect or disconnect (but the player can still add local players), and going to the menu will pause the entire match. This mode is very good for anyone who wants to learn the feel of a new character, or if you just want to test yourself against varying levels of difficulty. There are 6 difficulty settings, ranging from 0 (Very easy) to 6 (Very hard) that are represented by bars. You can only change difficulty at the start of a game. In this mode, the player can select a map of his/her choice or go with the random option. The outcome of Bot Matches will not affect the player's ranking in the leaderboards. 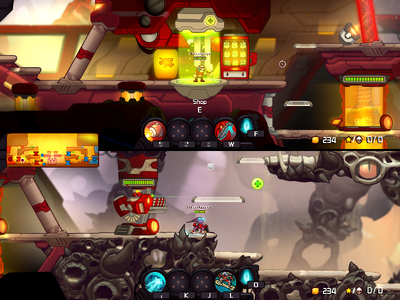 To play with friends on a split screen, players must select Battle or Private Match and add more players on the same computer or console. On a computer this may be a bit difficult as players may need to share a keyboard, but controllers can be used as well.

Mostly everything is the same in a split screen match, other than the map's placement.

Players may experience a slight decrease in framerate when playing this game mode.

The achievement, 'Party at Sky Vault' requires players to win a game with two other friends on splitscreen.

This is a game mode meant to teach new players about the base mechanics of the game. In it, players control Sheriff Lonestar in a simplified version of Ribbit IV and must follow the instructions on the screen (from Blabl Zork) in order to win.