Genji is one of the last of his species: an Entin. The Entin are rapidly reproducing caterpillars with a high libido and no sense of limitation. Any planet the Entin visit, they leave ravaged in their wake. They have been labeled a pest in need of extermination for eating entire continents worth of crops and terrorizing the local populace with late night techno raves. As a result, their kind has been bugsprayed to the brink of extinction.

Trying to better their ways, the remaining Entin have created the Order of Popae Monks on the fungi moon Pulvan. Fasting heavily they devote everything to their beloved deity: The Grand Space Butterfly!

Genji sinned with snacks and dirty literature however, and after repeated solitary cocoonfinements failed to make him better his ways, he was sent out on an emergency soul-cleansing pilgrimage through the galaxy.

Joining the Awesomenauts to cut back on the traveling costs of his journey, Genji has been the scourge of many a ship's pantry and is rumored to be the main reason some of the smaller more edible-looking 'naut recruits have gone missing.

▶️"Put you to sleep, I shall!" - Probably a reference to Star Wars[1] character Yoda[2] and his peculiar way of speaking.

▶️"You shall not pass!" - A reference to Gandalf[3], a character from The Lord of the Rings[4] novel.

▶️"Afraid yet? You will be..." - Probably a reference to Star Wars character Yoda[2] and his peculiar way of speaking.

▶️"I see fortune in my future!"

▶️"Fly you fools!" - A reference to Gandalf, a character from The Lord of the Rings novel.

▶️*Cough* *cough* "I need to clear my throat" - A reference to Yogurt from Spaceballs.

▶️"Going back to spin my sweater!"

▶️"We all live in a material world!" - Possible reference to Material Girl[5], a song by American singer Madonna[6].

▶️"Pffft... the material does not affe- OOOH, shiny trinkets!"

▶️"I see fortune in my future!"

▶️"Space Butterfly, grant me your strength!"

▶️"We are all but specks of dust in the dream of the Grand Butterfly."

▶️"Heheheh, cocoons fall from the sky!"

▶️"All shall belong to the hive!"

▶️"Calm my senses this nectar will." - Probably a reference to Yoda[2] and his peculiar way of speaking.

▶️"An offer you shall be, to the Space Butterfly!" - Probably a reference Yoda[2] and his peculiar way of speaking.

▶️"Shun the nonbeliever!" - A reference to a line from Charlie the Unicorn.[7]

▶️"From the cocoon, I awaken!"

▶️"Your blood for the Butterfly!"

▶️"Your soul is mine!" - A possible reference to Shang Tsung[9], and one of his lines from Mortal Kombat.[10]

▶️"Heheheheh, more souls for the Master!"

▶️"A butterfly grows within me!"

▶️"All shall belong to the hive!"

▶️"Space Butterfly, grant me your strength!" - A reference to the Voice Actor, Jesse Cox.

▶️"Curses! Curses!" - A reference to Mojo Jojo[12], the main antagonist in the Powerpuff Girls series.

▶️"Tear you apart I shall!" - Probably a reference Yoda[2] and his peculiar way of speaking.

▶️"You have no power here!" - A reference to the memorable quote of King Theoden[15] in The Lord of the Rings: The Two Towers.

▶️"I'm having a mid-death crisis!" - Possibly a reference to the Warcraft III monster, Shade

▶️"Seize their lives, we shall!" - Probably a reference to Yoda[2] and his peculiar way of speaking.

▶️"The shrines are under siege!"

▶️"Fall back to the darkness!"

▶️"To The Void cave!" - A possible reference to the Batman's Batcave[16], but in this scenario, used by worshipers of the Void Moth.

▶️"I require the solace of the shadows!"

▶️"More power for the cult!"

▶️"A powerful weapon this will be!" - Probably a reference to Yoda[2] and his peculiar way of speaking.

▶️"I am the only certainty!"

▶️"The Void Moth hungers!" - A reference to a Stalker[18] quote from Starcraft 2.

▶️"I am the ghost of Awesomenauts past!" - A reference to Charles Dickens'[19] A Christmas Carol[20].

▶️"I am the only certainty!"

▶️"Give my regards to the abyss!" - A reference to the Necromancer class[21] in Diablo II, after killing Mephisto.

▶️"I am death! Destroyer of worlds!"

▶️"I become one with The Void!" 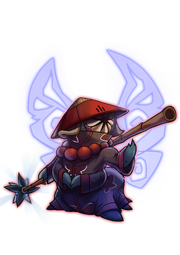 From the land of wind, fire, water, lightning and earth comes Kage Genji. Defending the village of the Hidden Cocoon from all forces that would oppose it, Kage Genji holds the highest religious rank an Entin disciple can attain. Are you a weary traveler looking for spiritual guidance? Then turn your clouded gaze to Kage Genji! - Official Steam Store description.

This skin gives Genji a kimono based on Akatsuki kimono from the Naruto franchise, a chinese straw hat and a praying beads necklace. His butterfly staff is replaced by a bamboo one as well. 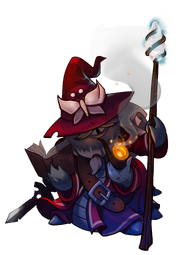 Genji the Grey wizard is not some conjurer of cheap tricks. He's a trusty companion for any questing party in need of his wisdom or his crafty smoke rings! Are you in need of some fireballs, wisdom and balrog smiting? Look no further than Genji the Grey! - Official Steam Store description.

This skin is obviously based on Gandalf the Grey from The Lord of the Rings novel and, as such, gives Genji the vests of a wizard, completed with a wizard hat with a butterfly-shaped buckle on it. The tip of his staff is a glowing crystal.

Although it's based on Gandalf there some other (possible) references to other media: Genji carries a giant scroll on his back, much like League of Legends' Ryze, while his beard is similar to Dumbledore, from the movie version of Harry Potter. 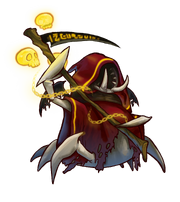 From the darkest reaches of space, the Void Moth comes to spreads its wings over all of creation. To aid him in his eternal struggle against the Space Butterfly, the Void Moth has sent out it's most powerful prophet, Grim Genji, to go forth and gather more souls for his master.

This DLC contains a custom skin for Genji in Awesomenauts, and comes with a fully customized voice set by Jesse Cox!

If you have not already unlocked the character, purchasing this DLC will do so.

Grim Genji was designed by community member Li Yang 'Xethoz' Lim for the Design-a-skin competition and was chosen by the community as the most awesome concept from more than 250 submissions! - Official Steam Store description.

This skin gives Genji the looks of the Grim Reaper: He has a skeletal body with exposed ribs, bony limbs and tusks. He wears a much darker team-colored cloak and has small bat wings on his back. He wields a scythe with glyphs etched on it, which he uses as a wand as usual.

A skull can be seen when he casts Monarch Blessing and unlike previous skins, he says lines when using Cocoon. Butterfly shot is replaced with a flying skull instead of the usual butterfly (with the Storm Drum cloud having flying bats on it as well).

Being premium, this skin comes with its own unique voice-acting.