Ix was a courageous Luxuxi spirit who roamed the crystal planet of Luxor. Carefree and totally zenned out, the infinite crystal reflections were all the family and friends Ix needed. But then the Disaster struck. Intergalactic megacorporations started to drill Luxor’s dark side on a massive scale, as it housed unusually energetic crystals.

At first Ix tried to ‘discourage’ the miners in various ways. Most annoying was when he swapped the sugar for crystals, causing several aliens to break their teeth and having to stop using sugar in their coffee altogether. Despite the meddling of this ethereal interloper however, the miners kept drilling with dogged determination.

In a flash of self-righteous outrage over this, Ix merged its life force with some high-energy crystals. This unprecedented merging of forces finally gave Ix a corporeal form. Harnessing the energies of this new crystalline body, Ix razed the miner’s facilities to the ground. The destruction of their Zork industries porta potties turned out to be the last straw, as the miners finally gave up and left.

Feeling particularly good about himself after this deed, Ix decided to keep harassing intergalactic mining operations. After a while Blabl Zork got wind of this raw talent for drill destruction. He then convinced Ix to join the Awesomenauts by presenting the mercenary team as an environmental force for good.

▶️"Your deaths will fertilize the land!"

▶️"For every one of you that dies, I'll plant a tree!"

▶️"Remind me, which bin do I use to recycle you?"

▶️"Help me, brothers and sisters!"

▶️"This aggression will not stand, man!" - A reference to The Big Lebowsky[1].

▶️"Make defense, not offense" - A reference to the slogan "Make love, not war"[2]

▶️"Unchecked privilege heading our way!" - A reference to the meme "Check your Privilage"[3].

▶️"Ugh. Need to wash my hands after this!"

▶️"Oh, this one is Solar-powered!"

▶️"Did you know? Each teleport could power a Zurian's house for a century!"

▶️"I return to my safezone!"

▶️"By our crystals combined! I am Ix!" - A reference to Captain Planet[6].

▶️"How much wood could a woodchuck chuck before they hear the trees crying?"

▶️"Oof! This drop pod did fall far from the starship!"

▶️"By our crystals combined! I am Ix!"

▶️"I wore scarves before anyone else did!"

▶️"I have many facets, and they're all as hard as diamond!"

▶️"Pollution is not the solution, my friend!"

▶️"Protect the environment! Hey, what's that drill doing in our base?"

▶️"My scarf is 100% organic, fair trade, suffering-free fiber! And yours?"

▶️"Whoa whoa, slow down, my friend! No need for raised voices!"

▶️"How much wood could a woodchuck chuck before they hear the trees crying?"

▶️"I tried to save the universe from pollution before it was cool!"

▶️"There are two sides to every psionic bond!"

▶️"I can't believe how antiquated you are!"

▶️"There's a special robotic hellscape for you!"

▶️"Think you can escape my tracking sensors?"

▶️"Believe this: before this match is done, you're scrap!"

▶️"Am I grinding your gears?"

▶️"Better and faster every hour!"

▶️"Twice the power, double the fun!"

▶️"Clunk? Derpl? Sentry? They're tin cans when compared to me!"

▶️"Strip away my armor and what's left? Fusion-powered engines, that's what!" - A reference to Iron Man[14] in The Avengers[15].

▶️"Straight from heavenly homeworld of Luxor, I am the Steel Seraph!"

▶️"I will strike down everything and everyone in my way!"

▶️"I do not sleep! I never tire! My will is everlasting!"

▶️"I have a score to settle with evildoers everywhere!"

▶️"Has anyone felt a malevolent presence?"

▶️"Why on earth am I using a droppod when I have wings?"

▶️"That's how Awesomenauts do it, and it's worked out pretty well so far!"

▶️"Enemy activity dealt with!" - A reference to Iron Man. 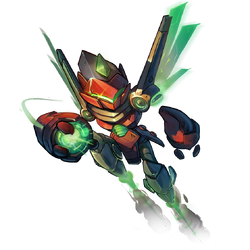 As angels are usually peaceful and quite focused on their herbal infusions, the Heavens did little more than weep as soulless robots and demonic mercenaries slowly spread across the galaxy. However, one of these angels could no longer stand idly by and decided that the time had come to intervene in the realm of mortals.

Turning the weapons of the robotic overlords against themselves, this angel became an armored being of high-tech destruction. Now this fusion-powered, nano-enhanced, tungsten-plated angel is feared across the galaxy. In their frightened whispers its adversaries call this mysterious being 'the Steel Seraph'.

Having made landfall on Luxor, the Steel Seraph strikes fear in the hearts of all droids, robots, and demonic influences in the region of space dominated by the ones and zeros. Its first destination? The Awesomenauts!

This DLC contains a custom skin for Ix the Interloper in Awesomenauts, and comes with a fully customized voice set! If you have not unlocked the character yet, purchasing this content will do so. Steel Seraph Ix has unique voicelines when encountering robotic or demonic opponents. - Official Steam Store description.

This skin makes Ix into a robotic angel. He has a visor instead of a face, with a crystal floating slightly above his head. He has large shoulder pads and two holographic wings on his back. The bottom of his feet have jet thrusters, which can be seen when he moves and jumps. He leaves a green glow effect whenever he moves.

The projectiles for Radiate are holographic and more streamlined. Many of his particles are changed into polygon grids, including the impact of Radiate bolt, particles from Refract, and the dust trail from Prismatic Moonstone Dust. The projectile from Psionic Bond is a mechanical claw and the bond itself is thicker. Displace has the same polygon appearance. Refract becomes a forcefield surrounding Ix.