Leon's life is a life of crime, women, and borrowing without returning. He lost his arm in a unfortunate jeu de boules incident and spends most of his time smoothly escaping debt collectors. He found himself breaking into the bedroom of the prime minister's wife, while looking for the wine cellar.

He knew no amount of charm could save him this time and planned his escape, which was eventually delayed because he refused to escape in anything but a space yacht.

Leon joined the Awesomenauts for some quick cash, spending it on beautiful women and exquisite meals. In combat, he puts his natural reptile abilities to some good use and slices up his enemies with great precision. Combat is a form of art for this green gentleman.

Is there nothing good?

What is that, what is it?

Give me your money

Give me your cheese

I give you all my love

And I turn on your heater"

▶️"I blow my nose in your direction!" - A reference to the film Monty Python and the Holy Grail.[1]

▶️"Your mother was a hamster!" - A reference to the film Monty Python and the Holy Grail.[1]

▶️"Feel the sharpness of this blade!"

▶️"Feel the sharpness of this blade!"

▶️"Accent? What do you mean, accent?"

▶️"Ah... Vous just mad!" - A reference to an Awesomenauts-related meme started on the Ronimo Games forums by user Tanshu. It consists of an image of a 'naut (usually wearing one of their upgrades) saying "you just mad".

▶️"It is the day you almost captured capitaine Leon Pirate!" - A reference to Jack Sparrow[4], a character in the Pirates of the Caribbean[5] movie series.

▶️"Ha! You are shark cuisine!"

▶️"Aha! I send you all to the bottom of la mer"

▶️"Haha! They never saw me coming!"

▶️"Haha! No one defeats Leon Pirate!"

▶️"Sail the oceans of love with capitaine Leon Pirate!"

Leon says many food names in french as quotes. This is a reference to Flight of the Conchords[6].

▶️"Your fear. It will be your undoing!"

▶️"I have a blade with your name on it!" - Possible reference to a similar taunt line from Raelynn.

▶️"Silence! You will be killed by me!"

▶️"Your fear will be your undoing!"

▶️"Help me! My goggles aren't working!"

▶️"Come on! Distract these imbeciles!"

▶️"Ghost Leon at your service!"

▶️"Ghost Leon at your service!"

▶️"I smell your fear. It smells like a ripe camembert!"

▶️"They never knew what hit them!" - A reference to Starcraft.

▶️"Ha! They never knew what hit them!" 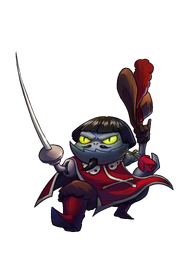 This skin gives Leon a french Mousquetaire costume with a plumed hat and a rose on his mouth and replaces his blade with a rapier (also altering the slashing sound so it's more accurate).

A new trail particle effect is added to Leon's movement. 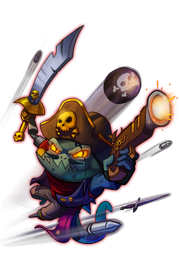 "Aaaarrrrr, ya scurvy old sea dogs! This here be the most feared pirate of the universe! Wanted on over 500 planets for camembert plunderin', grog stealin' and sweet talkin': you'd be wise t' to hide your beauties, for leon pirate be comin'! Leon Pirate comes with a fully customized voice set!" - Official Steam Store description.

This skin gives Leon a pirate costume complete with a pirate hat with a skull emblem on it and a peg-leg. His blade is replaced with a saber.

Being premium, this skin comes with unique dialogue lines as well. It also costs $5.00 instead of the usual $2.50 for skins. 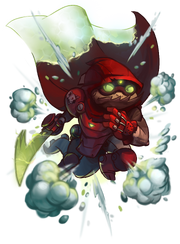 This skin was awarded to players who donated to the Bronze/Silver Tier or higher, in the Awesomenauts: Starstorm Expansion Kickstarter campaign.

This skin gives Leon futuristic armor, a different-looking blade, a hood, cape, and a pair of goggles. The Slash animation is altered to leave a trail of digital hexagons when he swings it.

Being premium, this skin comes with unique dialogue lines as well. 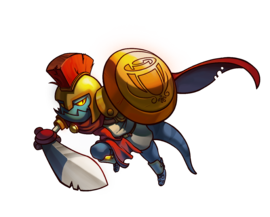 My name is Leon Legionnnaire, commander of the Armies of Aiguillon, connoisseur of fine cheese and loyal servant to the TRUE emperor: Blabus Zorkonius. Owner of a stolen space yacht, winner of the 3586 jeu de boules cup. I will claim my glory, in this battle or the next.

This DLC contains a custom skin for Leon in Awesomenauts.

Leon Legionnaire was designed by community member Lautaro Aglione for the Design-a-skin competition and was chosen by the community as one the runner-ups to Grim Genji from more than 250 submissions! - Official Steam Store description.

This skin gives Leon the typical Roman legionnaire attire: He has a gold/bronze (depending on team) galea on his head (with a team-colored decoration), and wears a white toga with a team-colored paludamentum around it. He also has gold/bronze colored greaves and shoulderplates to protect his legs and arm, and a team-colored cloak on his back. His arm-blade is replaced with a gladius (with unique slashing sound effects) and he wields a golden/bronze scutum with a rose insignia engraved in it in his hand.