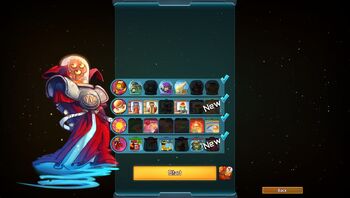 Loadout is gameplay element present in older versions of Awesomenauts. It allows players to select the items they'll bring to battle prior to joining the actual match. It was removed in Patch 2.6 Reloaded in favor of the Zork's Mega Shop.

Right after you select an Awesomenaut, you will go to the loadout screen. At the loadout screen, you can select the upgrades you want for your 'Naut when fighting enemies. Any combination of upgrades is commonly referred to as a "Build".

There are 4 rows of upgrades: one for your first ability, one for your second ability, one for your auto attack and one for Utility Upgrades. Each row has 6 upgrades, but you can only pick 3 per row to play with. For every 'Naut, 4 of the upgrades on the first three rows are always unlocked, while the last two require you to reach a certain Level to unlock them. Therefore, if you Prestige, you will have to unlock all of the upgrades for the 'Nauts over again.

This system adds a lot of depth to the characters of Awesomenauts. There are many kinds of builds that players can make, and will result in a large amount of variety when fighting enemy 'Nauts. For example, a Yuri player could have his Warp Time heal his allies, while the enemy Yuri could have replaced that upgrade for increased slowing power. This is one of the many examples of the build variety that can be achieved in Awesomenauts.