Yoolip has been a scientist for the greater part of his life on the transistor planet Calias. Creating wondrous inventions and contraptions like the dog aura reader, the nightmare-to-VHS recorder, the random number phone, the cereal-to-milk ratio calculator and an actual time machine. One day after combining the time machine into some comfy slippers, he teleported to the Mesozoic era and found himself surrounded by some scientist hungry velociraptors.

Barely escaping the predators he lost one of his slippers. Being stuck in time he spent years to craft a new slipper to travel forward in time to return to his beloved granddaughter, Ayla. He joined the Awesomenauts team to finally spend some quality time with her and eat some over-engineered pancakes.

▶️*Sniffs* "Ahh, the smell of my sandals after a brisk morning walk. That's you."

▶️"You are the rust on my valve, the suds in my oil tank!"

▶️"Would you kindly help this muzzleseer?!" - A reference to Bioshock.[1]

▶️"Hey! No one's allowed in the workshop!"

▶️"Hey! No one's allowed in the workshop!"

▶️"Dagnabbit, rodents getting bigger every millenium!"

▶️"Now then, know's around here somewhere... oh where's that blasted salmophlange?!" - A refenrece to ThunderCats[4]

▶️"There's a trinket for everything!"

▶️"Well now, last time I teleported I ended up a trillion years in the past... it was not good."

▶️"Last time I teleported I ended up a trillion years in the past... it was... lonely, heheh not any- no one around and it was not good at all, no... no."

▶️"Oh! Heheh, I forgot to bring something, heheh well, better get it."

▶️"Time for the tinkerer!" *Mumbles*

▶️"Straight out of the mesozoic, an inventor named Milton Yoolip!"

▶️"I'm sure I had that multiwrench tucked on my belt or was that my cereal-to-milk-ratio calculator? Heheh... where is it, now?"

▶️"I'm sure I had my multiwrench on my belt or- or was that my cereal-to-milk-ratio calculator? Heheh... what have I done with it?"

▶️"I hope someone's taping this on my nightmare-to-VHS recorder. Patent pending, of course."

▶️"The land before time... is my time! Strangely enough." - A reference to The Land Before Time.[7]

▶️"I hope to see my beloved granddaughter today! Ayla, are you there?"

"Who'd like a pancake? What do you mean 'there's bolts on them?' That's the good part!" ▶️

▶️"Now then... People call me an overengineer, but I say: what's a hat without at least a telescope and a stove on it? Heheh yes."

▶️"I invented this technology for fun, not destruction!"

▶️"Hmm, yes... Last time I put these many down, dinosaurs still walked the universe."

▶️"I'm used to pacifying lizards. Heheheh, you think a few mammals'd cause me trouble? Hoho... no..."

▶️"To the great tinkerer beyond!"

▶️"Well, what did you expect? It's all salvaged." - A reference to Micmacs[9]

▶️"Argh. We'll have to replace that."

▶️"Smack dab in the middle!"

▶️"Time to earn your keep!"

▶️"How's this for chaos theory!"

▶️"Time to bomber your man-heinie into oblivion!" - A reference to Bomberman.[11]

▶️"The games you play nowadays, heheheh, they're all baby stuff!"

▶️"What is this here, I just don't- What, is my clock speed too fast for you?"

▶️"Help! There's a Katamari coming to roll me up!" - A reference to the Katamari[13] game series.

▶️"Now then. If all else fails, button smash!"

▶️"Attack those bad dudes!" - A reference to Bad Dudes VS. DragonNinja.[14]

▶️"There's nothing retro about attacking!"

▶️"Oh my! A huge flaming centipede! Right there in the sky!" - A reference to Centipede.[16]

▶️"Well... Maybe my firmware could use a pixel lift. Heheheh."

▶️"Now then, returning to main menu!"

▶️"Well now, lemme hold the power button down for a while!"

▶️"Time to bomber your man-heinie into oblivion!" - Reference to Bomberman[11]

▶️"Ack! A loading screen? Just when I thought everything was set for fun!"

▶️"Why I- Don't throw your hardware out the window! Ahhhh!" *mumbles*

▶️"Well, you know. I'm the wizard! The king of kong! The winner of every console war that ever was!" - A reference to The Wizard[19] and The King Of Kong: A Fistfull Of Quarters.[20]

▶️"What, I can't- Someone help me get this tube off my head? Well I was dozing off and then I fell into my pile of gaming systems!"

▶️"I'm on a pixel-perfect power trip! Yes! It's wonderful! I guess- I can keep going! It just keeps going! I mean, it's perfect! Just perfect!"

▶️"You're not playing this on a pirated floppy disk, are you? No, no, no!"

▶️"Who needs triple core processors when you got Mode 7 graphics, whippersnapper?" - A reference to Mode 7.[21]

▶️*Hums a part of Korobeiniki* "Everybody! Heheh yes!" - A reference to Korobeiniki[23], famously used in Tetris.[24]

▶️"Onwards to the next level!"

▶️*Gibberish* "You got blood decals all over me!" *Gibberish*

▶️"What's the matter? Do they need to dial down the difficulty?"

▶️"Oh, did I just disconnect that controller?" *Snickers*

▶️"You have no chance to survive! Make your time!" - A reference to the now infamous intro to Zero Wing[26].

▶️"Ooh! Good thing I picked up that extra life!"

▶️"They don't call it a 'joystick' for nothing!"

▶️"Be dazzled by my shiny pixels!"

▶️"Awesomenaut get! Yes, heheh yes." - A reference to Japanese to English translations in early video games and popularized as an inside joke[30].

▶️"Cut them down a few pixels!"

▶️"Any sprite that moves is yours!" 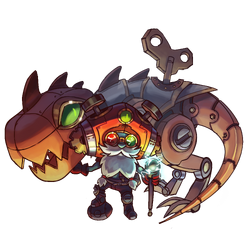 Professor Milton Yoolip has made many inventions, but his best work is quite possible a fully-sentient robot that mimics his every move. Whenever duty calls but Yoolip would rather spend his time tinkering on new gadgets or go to the park with his granddaughter, he sends Clockwork Yoolip to take his stead. Few people even notice the difference, given the Professors eccentric personality and the many tools he usually carries around.

This skin gives Yoolip a more detailed hat with moving pistons and gears. While the hat is colored the same way for red team, in blue team his hat is colored violet instead of teal. His wrench is replaced with a tesla rod and his beard is done in two braids. Yoolip also wears red/green goggles with a green cover over his third eye. Standing still and walking will play new mechanical sound effects.

Robo Dinos have a more bronze colour and some gold details. They also have wind-up keys on their backs. The hit graphic for Gripping Gaze is surrounded by gear teeth. 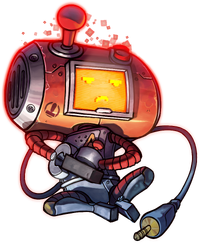 Professor Yoolip’s most dangerous invention is probably the 8-Bit Game Cartridge-to-Reality generator, which is capable of reading any game cartridge from that ‘80s and turn the world contained within to reality. When he first tried this invention, it unleashed dragons, demons, and countless other monsters into the world… and a lot of heroes that wouldn’t do anything unless told specifically where to go.

Among these armored knights, boys in tights, and foreign princes, Yoolip found what appeared to be an 8-Bit version of himself… just sitting there, waiting for someone to take control of his destiny.

Realising he had just become the hero to a dozen different games at the same time, Yoolip took matters into his own hands and modified his invention to allow him to take control of his 8-Bit counterpart. Now he and his Robo Dinos are ready for some old school action!

This ultimate skin gives Yoolip a complete overhaul: his helmet has a slightly flatter surface, his third eye is missing, the antennae are replaced by an arcade machine joystick and buttons and there's an unplugged power cord attached to it.

His face is replaced by a visor with a pixelated face that looks happy on red team and evil on blue team. It also changes according to his movements and attacks: arrows point up and down as he jumps up and falls down respectively and he has different facial expressions for his attacks and abilities. He has a mechanical body with robotic limbs, including claw-like hands. His wrench is replaced by a beam of light with an Atari 2600[31]-inspired joystick.

This skin also overhauls every visual effect available to him: there are three hearts under his health bar that mimic his current health, going down as it is depleted (based on percentage). Upon death, 8-bit Yoolip explodes in a cloud of pixelated gems and leaves behind a pixelated "INSERT COIN" message. The visual trails for when he walks and jumps are pixelated, Wrench smack leaves behind pixelated trails and generate pixelated green hearts when healing friendly droids, gripping gaze is not only pixelated, but also spawns a "ring" of Space Invaders[32]-like creatures around the victim and the robo-dinos are pixelated, and redrawn in retro-style. Even the healthpacks created by him are pixelated.

Finally, he has a unique teleporting animation (displayed on his tv screen visor) depending on which team he's in: an hourglass on red team and a depleting battery on blue team.

Being an ultimate skin, there are also additional changes regarding voice acting, sound effects and music: Yoolip's sound effects are all inspired by 80s videogames, his voice acting is not only unique, but also sounds like it's coming from a gameboy soundbox and he has unique theme and killing spree themes.

In addition to all that, as a previously secret easter egg, any player present in a match that has an 8-bit Yoolip in it, is able to type in "/pixels" in the game chat to enable/disable Ultrapixels mode reminiscent of Ronimo's April Fools' joke in 2016 regardless of if they own the skin or not. This causes the message "Ultra Pixels: it's the future!" To appear in the chatbox and the game to become pixelated via a filter. Typing the message in chat a second time displays the message "Ultrapixels are so 1983!" and disables the filter. This is likely a reference to the videogame crash of 1983[33].