Raelynn loves big guns. After highschool she went straight into the E.L.F. army to fight against the invading robots, just before the first AI war.

She was trained by the best and excelled in long range weaponary. Within a year she was given the honor of joining an elite squad called the SkyHawks, where she met the love of her life: her Pulserifle "Cuddles".

For years they did covert missions together as a team to disrupt robot production and steal robot technologies. They were feared by all robots (well...the ones with emo-chips).

Until that one deep space mission to AI station 404 in the year 3009, where she ran into a robot ambush, and "Cuddles" was brutally taken away from her. Raelynn was put into cryostasis. Decades passed until a small mercenary team found her hidden on the planet. There she was rejoined with "Cuddles" and many warm 'hugs' were given that day to all robots on 404.

▶️"Lets make this fun! Run as fast as you can."

▶️"Not even worth my time."

▶️"You boys ain't ready for this." - Possibly a reference to Back to the Future.[3]

▶️"Where is the air support?!"

▶️"The eagle has left the nest!"

▶️"Requesting evac!" - "Evac" is a military abbreviation for "evacuation".

▶️"Look at all these shiny toys!"

▶️"What do I feel when I shoot an enemy? Recoil..." - Based on a quote from Simo Heyha[5], a famous Finnish sniper.

▶️"Somebody give me a sitrep!" - Sitrep is a military acronym for "situation report".

▶️"This is my rifle. There are many like it, but I call it Cuddles." - A reference to Rifleman's Creed.[6] and the TV Show "Firefly" Jaynes Cobb's Quote "I Call it Vera"[7]

▶️"Thanks for standing still, idiot." - Reference to the Sniper[9] from Team Fortress[10] series.

▶️"Tango's down..." - In the NATO phonetic alphabet[11], letters are replaced with english words beggining with said letter and that are universally easy to understand, regardless of native language. "Tango", in this case stands for T, representing "Target" or "Terrorist".

▶️"Say hello to my little friend!" - Reference to Scarface[17]

▶️"I shall smell your stench!"

▶️"Time to replenish the old holiness."

▶️"I need a bath after all this hunting!"

"I did at least two good deeds."

"Three good deeds is kind of a record!"

▶️"You have the goods, I'll bring the good!"

▶️"These savings will save your soul!"

▶️"Do I get a neutral good discount?"

▶️"Evil: Smellier than my chain mail after a hot day."

▶️"I can sniff out a target from the dung on their boots!"

▶️"This battlefield reeks of the dead!"

▶️"I arrive in the dead of night!"

▶️"Cloaked and ready to go!"

▶️"Evil's about to be hunted to extinction!"

"...find whatever afterlife you see fit!"

▶️"Were my prayers no good?"

▶️"It'll give me great pleasure impaling you!" 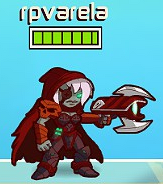 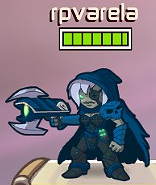 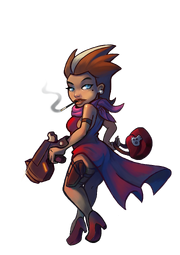 "Who needs practical body armor anyway when you're carrying a retractable sniper cannon? You might as well dress up and look fabulous as you lay down a hail of sniper fire upon your enemies!" - Official Steam Store description.

This Raelynn skin replaces her clothes and visor with an elegant party dress, high heels, and a holster strapped to her thigh. She also uses lipstick, make-up, and a scarf around her neck.

There is also a beauty mark close to her eye. 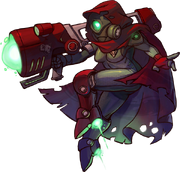 Bionic Raelynn adds a "greyish" hue to her natural armor coloration and covers her arms as well instead of having them exposed like in the default look. Her cape is team-colored and she wears a helmet and a hood. 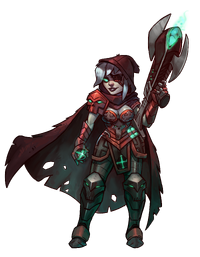 Whoever said 'The enemy of my enemy is my friend' sure never met Soulhuntress Raelynn. Though she spends her days hunting demons, cultists, and other evil scum (which lots of folk appreciate), she's not particularly nice company at parties and friendly get-togethers. One time she attended a feast some villagers organized in her honor and she used her laser rifle to 'cleanse' the demon-shaped chocolate cake the villagers had spent days to prepare for her in secret. In the end, she's just not a people person, and most people have learned to leave her alone and not invite her to their parties.

She is GREAT friends with Cuddles though. Together they've cleansed more demons and other evildoers from this world than you'd feel comfortable knowing. And a chocolate cake.

This DLC contains a custom skin for Raelynn in Awesomenauts. You need to have Raelynn available as a playable character in order to access the skin in-game. Owning this skin will also unlock the special portrait for use in-game. This skin contains a fully customized voice set. - Official Steam Store description

This skin gives Raelynn a "dark" huntress of evil look. She wears a hood and cloak and her jumpsuit is replaced by dark armor with skull-shaped shoulderpads and a glowing green timerift grenaded on her belt. She has pale skin, white hair and glowing green eyes. Cuddles is modified, having two blades (one on top and on on the bottom).

While mostly unchanged, Snipe has a different sound effect. Timerift has a fog and skulls visual effect and protoblaster shots are green.

Being premium, this skin comes with its own unique voicelines.