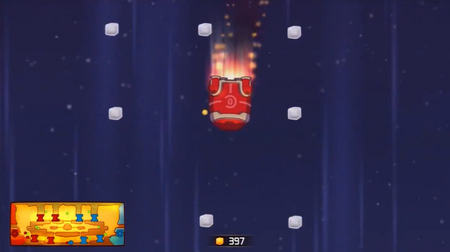 When first entering a game and after dying, the player will spawn/respawn. In awesomenauts players go through a mini game while respawning, in which they control a drop pod (as shown in the picture) which can go left and right. The objective is to collect as many Solar cubes as possible. The Solar routes differ from map to map. With enough practice, the player is usually able to memorize these paths and collect an increasing number of Solar.

As the player character levels up in a match, his respawn timer increases. This mechanic prevents players from abusing suicidal tactics without fear of consequences. Awesomenauts lose 30 Solar upon death and won't generate Solar passively while waiting to respawn. The respawn timer is set to 6 seconds and increases by 1 second per level the team has, capping at 25 seconds.