When a job's too dirty for The Intergalactic Police Department to take on, they call Rocco. This old Bird's the most relentless, gruff and tough-as-talons hitman vigilante this side of the Milkyway. Rocco is feared by the most dangerous solar cartel gang bosses, Shisu mobsters and other crazed alien psychopaths for his "ravenous methods". Not shunning any kind of weapon, Rocco prefers his ACOG Blackout G-Mag Laserbow, which has got him out of a tight spot more than once.

Rocco's aggressive behaviour did result in a lot of powerful enemies however, including a corrupt Galaxial congressman who made him a wanted man, and forced him to quit the force but instead of a retirement at the Kentucky Friends and Poultry Retreat he joined the Awesomenauts to plot his next move on his path to rid the universe of all space-scum.

▶️"Shisu mobsters on my tail!"

▶️"A bit of the ol' ultraviolence!" A reference to the book A Clockwork Orange[1].

▶️"Gotta get the job done!"

▶️"Time ta plot my next move!"

▶️"Awright, don't get yer plumes in a bunch!"

▶️"Lemme show you my method!"

▶️"Birdemic!" A reference to the film Birdemic: Shock and Terror[5].

▶️"They don't call it a murder a crows fer nuthin'!"

▶️"Birds of a feather... fall together!"

▶️"If you're picking the wrong fight, bring the right weapon!"

▶️"They're taking it to the bridge!"

▶️"I've heard of hawkin' your wares, but... this is ridiculous."

▶️"Around the world!" - A reference to the song Around the World[7] by Daft punk.

▶️"Straight from the interstella line!" - Possible reference to the Interstella 5555[9] animated short film.

▶️"You're all gonna pay for your crime!"

▶️"Luck can turn on a bloody dime!"

▶️"See me toppin' the charts!"

▶️"All youse is derezzed!" - A reference to the song Derezzed[12] by Daft Punk.

▶️"That's a platinum record, that is!" 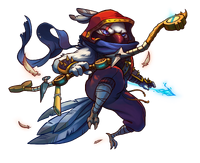 When Rocco was forced to leave the Intergalactic Police Department, he disappeared without a trace.

With Rocco out of the picture, his former enemies were emboldened and tightened their grip on the citizens living the densely populated residential areas of Ribbit IV. They soon learned to fear the shadows that once provided them with safety when rumor spread of a new, hooded figure dispensing justice to the injust.

Where they were once hunted by Rocco the Lawman by day, they were now hunted by Shinobi Rocco by night. They say Evil never sleeps, but they never told you that's because the Righteous made Evil afraid of the dark.

This DLC contains a custom skin for Rocco in Awesomenauts, and will automatically unlock the character if you have not already done so. - Official Steam Store Description.

This skin gives Rocco a ninja outfit, including a hood, a mask and golden belt buckles. His hands have golden and silver bracers and his legs are wrapped in bandages. He also wears a scarf around his neck. His bow, although similar to the original, looks much less advanced. 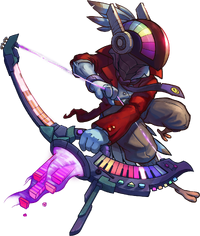 There are countless dimensions that are quite similar to ours, yet with subtle differences. In one of these dimensions, wars are not fought with weapons, but with music. Those that we know as mercenaries are the most amazing musicians in the other dimension, and they've enraptured countless worlds with their beats.

One of the DJs enlisted in the ranks of the great music syndicate known as the Awesomenauts is called Rocco. He was once a rising star in The Intergalactic Symphonic Orchestra, but was ousted by a concertmaster who would not tollerate Rocco's ruthless freestyle jammin'. Refusing the back down and drop his aspirations of becoming a great musician, Rocco instead opted to drop the beat and joined the Awesomenauts, who welcomed him with open arms.

Cybertronic Supersonic Electronic Rocco is now one of the most prominent DJs in the galaxy, and uses his music to bring peace to worlds ruled by dissonance.

This DLC contains a custom skin for Rocco in Awesomenauts. The Electronic Supersonic Cybersonic skin comes with a unique character theme, killing spree theme, a unique voiceover, and special in-game audio effects for his abilities.

If you have not already unlocked the character, purchasing this DLC will do so. - Official Steam Store description.

This skin gives Rocco Daft Punk[14]-inspired looks. He wears a team-colored suit, a shirt and a tie, while his face is concealed by the iconic "rainbow helmet" mask similar to the one used by Guy-Manuel de Homem-Cristo[15], complete with alternating color lights.

Rapid Arrows have a "sonic" explosion effect upon reaching max range or hitting a target, Precision shot's arrow looks like a globe when uncharged and has a unique visual when fully charged, while also playing a tune while flying across the screen. While active, Vengeance plays a sped up version of E.S.C. Rocco's theme. Vengeance-enhanced projectiles also get looks that are unique to this skin.