At the heart of the milky way lies the Bovinion system, ruled by a semi intelligent cow-like species. Although technologically advanced to an acceptable level, these Bovinions have maintained a tribal form of society for several thousands of years. Until recent years, an age-old custom in this society was to scare young Bovinion calves with bogeyman stories about a scary cowboy. Naughty Bovinion calves would, as the story went, be caught by this cowboy's unrelenting lasso.

Recently, a wealthy Bovinion visionary opened up a park where visitors would come to see a genetically re-engineered cowboy in action. But disaster struck and the cowboy escaped his cage. Before the Bovinions could react the cowboy had wrangled the entire park staff. Terror shook the Bovinion civilization as the cowboy started to wrangle every single Bovinion on the planet! Suddenly the Bovinions found themselves out of their cities and wrangled into herds on green meadows by the whisky drinking, bucket spitting, yeeehaawing horror.

Once the entire Bovinion civilization had been wrangled, the cowboy, naming himself Sheriff Lonestar, rode a rocket ship into the sunset, his job complete. Now Sheriff Lonestar fights as a mercenary in the robot wars, combining his awesome cowboy-powers with high tech weaponry to earn some Solar to spend on whisky and cigars.

▶️"I'm getting banged up over here!"

▶️"Headin' back to the Ranch!"

▶️"Leave some for when I get back!"

▶️"Time to kick butt and chew tobacco!" - Reference to They Live[1].

▶️"There's a new Sheriff in town!"

▶️"There's a new Sheriff in town!"

▶️"I just did the Universe a favour!"

▶️"Wildest gun in the galaxy!"

▶️"I got your fortune cookie right here, and it says: 'You're outta luck'!"

▶️"You're about to get some serious lead in your diet!"

▶️"I must be getting rusty!"

▶️"Come with me if you want to live!" - A reference to The Terminator[5] movie series.

▶️"Time to circle the wagons!"

▶️"Porting over the hills and far away!" - Possible reference to the Led Zeppelin[6] song[7] of the same name.

▶️"Back to the saloon to wet my whistle!"

▶️"Imma get me a recharge!"

▶️"That cost a fistful of Solar!" A reference to A Fistful of Dollars[8].

▶️"Whisky? Hah, that's for toddlers! Give me some battery acid!"

▶️"The law just got an upgrade!"

▶️"Time to wrangle some aliens!"

▶️"You are terminated!" - A reference to The Terminator[5] movie series. 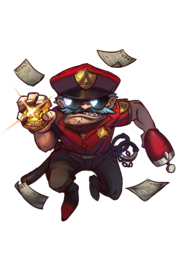 "Pull over buster! Freeze! The strong arm of the law has arrived and is gonna give you a ticket for looking horribly out of style in that old Cowboy attire! Your enemies will respect your authority if you upgrade your old Sheriff outfit with the new Officer Lonestar skin, and if they don't they'll be looking at four to five years in an intergalactic state penitentiary." - Official Steam Store Description


Lonestar wears the attire of a police officer, having his white hat replaced with a police hat, which has the Awesomenauts emblem on it. He also wears a pair of sunglasses, a shirt, a watch, and plain boots. His blaster is replaced with a modern pistol.


The Holo-Bull has a siren on it's back and plays siren sounds when it is summoned. 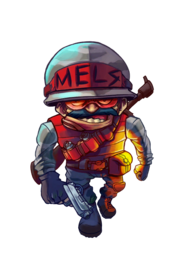 Mels is a cool kid that visited the Ronimo studio some months ago as part of a day that was organized for him by the Make-A-Wish Foundation. The Make-A-Wish Foundations is a non-profit organisation that grants wishes to children with life-threatening medical conditions, such as Mels. One of Mels' wishes was to experience and take part in the development process of a game, and we invited him to be part of Awesomenauts. We spent the day with Mels showing him how we make games and we also let him design a skin for his favorite character. This skin is the result of that day! We hope you like it Mels ;)

All the revenue we receive from this skin between now and the end of the year will be donated to the Make-A-Wish Foundation, to help them grant more wishes to kids. - Official Steam Store description

This skin gives Lonestar an urban camo vest, army helmet, glasses and gloves. He also wears team-colored body armor and a grenade belt and his blaster is replaced with a pistol with laser sights

Hyper Bull wears a helmet and is on tank threads. 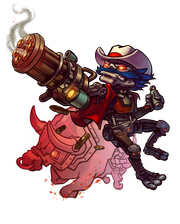 Hailing from an even more distant future than 3587, the Loninator has come to wrangle the Bovinion who would one day stop the rise of the Genetically Engineered Cowboy Overlords.

This DLC contains a custom skin for Sheriff Lonestar in Awesomenauts, and comes with a fully customized voice set! - Official Steam Store description

This skin is a robotic version of Lonestar based on The Terminator movie series. It is a metal body resembling a skeletal version of Lonestar with glowing eyes while keeping his trademark hat and jacket. It also maintains his facial hair. His arm and blaster are replaced by a minigun arm cannon with laser sight.

While his dynamite uses a new animation, the projectiles themselves are unaltered, being identical to the default version. His teleport animation is simplified to him raising his arm up, although it's accompanied by a new sound effect. Finally, his bull has a robotic look as well and making metallic sounds when spawned.

Being premium, this skin comes with its own custom voice set. 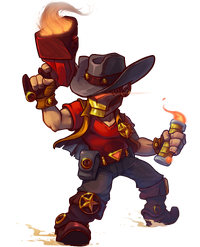 This skin gives Lonestar a differently colored cowboy vest: his hat is black with very dark tone of red/blue, his face is covered with a golden/bronze mask with a pink visor his jacket and glvoes are brown/silver, his shirt is red/blue and his sheriff badge is more well detailed. His belt has a different-looking buckle, his boots have stars instead of skulls on them and are brown/silver. His Blaster looks more advanced (blockier and with a different barrel), his Double Jump leaves behind a pink trail, his dynamites have golden details and explode into hexagon-shaped blasts and finally his hyper bull has golden armor, a sheriff badge and a helmet.