Skree belongs to a race of hitchhiking witchdoctors. Mysticism and superstition are a big part of Skree’s heritage. After being dumped on the Starstorm by a space trucker. Skree found himself all alone on an abandoned space station filled with mighty looking robots. Mistaking the robots’ station for a burial ground of ancient space spirits, he decided to live the rest of his life in service to the silenced automatons. He spent his time on collecting different parts of the battle station to create shrines for his newly found robot gods and connected robot parts and machine scraps to form huge robotic statues and altars. Unbeknownst to Skree, his rigging rites accidentally shortly activated the mainframe of the Starstorm, powering the construction robots and the Starstorm’s weapons systems itself.

All of a sudden Skree found the Starstorm vibrating as it’s systems slowly started to come online, it’s robotic denizens starting to carry out their age-old grim directive. Skree decided he liked his spirit-gods better when they were statues and went into hiding.

▶️"All your shrines are belong to Skree!" - A reference to Zero Wing[1].

▶️"You won't accept my peaceful religion? Then I'll teach you, BY FORCE!"

▶️"Size matters not! Judge me by my size do ya?" - A reference to Yoda[5], a character from the Star Wars[6] franchise.

▶️"When seven hundred years you reach, look as good, you will not!" - A reference to Yoda, a character from the Star Wars franchise.

▶️"Oh, powers that be, you gots ta help da Skree!"

▶️"You save Skree from death worse than fate?"

▶️"Do or do not, bradda, there be no try!" - A reference to Yoda, a character from the Star Wars franchise.

▶️"Dey is after me lucky shrines!" - Reference to Lucky Charms[7]

▶️"I don't remember dat being part of the Metal."

▶️"Shiny Trinket!" - A reference to Genji.

▶️"Shopping Skree!" - A reference to Coco.

▶️"This should ward off da misfortune."

▶️"So long, so long and thanks, for all the gears!" - A reference to The Hitchhiker's Guide to the Galaxy.[8]

▶️"Boom shakalaka boom!" - A reference to "I Wanna Take You Higher"[9] by Sly and the Family Stone[10], popularized by the arcade game NBA Jam[11]

▶️"Spirits love me, dis ah know, for de junkpile spirits tells me so!" - A reference to the song "Jesus Loves Me".[13]

▶️"Open your eyes! Ugh! Look within. Are you satisfied with the life you're living?" - A reference to the song "Exodus"[14] by Bob Marley & The Wailers.

▶️"Would you like a bag of weedlings, mon? I give ah good price just for you."

▶️"Dont look behind ya! Der be ah 3 headed monkey." - A reference to The Monkey Island game series[16].

▶️"Ah, it be time to get Jammin" - A reference to the song "Jamming" by Bob Marley & The Wailers.

▶️"Ya dead? Ya mon!" - A reference to the movie Cool Runnings.

▶️"Not if anything to say about it I have!" - A reference to Yoda, a character from the Star Wars franchise.

▶️"Final rites? For your friend?"

▶️"I be havin' a righteous groove!"

▶️ "You can blame my friends on the other side..." - A reference to Disney character Dr. Facilier, from the movie The Princess and the Frog[17].

Lightning Rod sounds are a reference to the song "Witchdoctor"[18] by Ross Bagdasarian, Sr.[19]

▶️"I will enjoy taking you apart!"

▶️"I'll be collectin' your bones!"

▶️"Scared yet? You will be!" - A reference to Yoda, a character from the Star Wars franchise.

▶️"Weakless fools, why ya makin me do everyting alone?"

▶️"Throw this in a pot and get a stew going!"

▶️"Da spirits, dey be calling me!"

▶️"'ere we go mon!" - A reference to Mario speech when selected in Super Mario Kart 64.

▶️"I Skree dead people" - A pun on a quote from the movie The Sixth Sense.

▶️"You be a fine sacrifice mon!"

▶️"From the ashes I shall return!"

▶️"Da bloodfire for you Ted!" 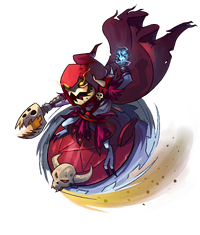 In the deepest of evil lairs, the infamous villain Skreeletor can be found trying to turn his dreams of universal conquest into reality. Having found hints of a powerful artifact known only as 'the Golden Weedling', he will do everything in his power to locate and claim this galaxy-conquering tool as his own. The only obstacle in his path is a small tribe of He-Mon'grahs from planet Skrultor Prime trying to obtain the very same artifact.

This DLC contains a custom skin for Skree in Awesomenauts, and comes with a fully customized voice set! - Official Steam Store description.

Based on Skeletor from the He-Man and the Masters of The Universe franchise, this skin gives Skree an undead look, giving him a skeletal head with glowing yellow eyes. He wears a hood, a cape and barbaric-looking armor with spiky shoulderpads. His hoverblade gets a skull with horns ornament and his staff has a skroggle (Gnaw's species) skull ornament as well.

Saw Blade has a skull and a pentagram glyph and Totem of Power looks like a skull as well.

Being premium, this skin comes with custom voice acting.

A merchant travelling to the western edges of the Galaxy for an unknown purpose once met a strange being on an asteroid. He allowed the being to accompany him, and listened to the many stories that he shared with him.

The being came into this world by the name of Sun Wukong, and claimed to wield unimaginable powers. The merchant scoffed at his new companion, and told him "You look like a Monkey, but if you truly are a primate you would be a King among them."

Sun Wukung glared at the merchant and zapped him with lightning, burning to him to a crisp. "They called me the Monkey King once, but none remain to do so now. I have become Skree, and I am free!"

Sun Wukong continued his journey to the western edges of the Galaxy alone.

Inspired by the ancient Chinese novel Journey to the West[28], this skin gives Skree the looks of Sun Wukong, making him more similar to a monkey, including the tail and giving him armor decorated with golden details and Chinese dragons. Skree's staff is replaced by Sun Wukong's staff and he rides a cloud instead of his usual sawblade.

Although lightning rod is unchanged, sawblade has an Yin & Yang symbol drawn in it and totem of power is replaced by a totem that also looks like a staff with a golden chinese dragon wrapped around it.