After escaping with the other renegades out the clutches of the “unstoppable” Piere Feu Darret the corrupt Scarg emperor, Smiles hid in the swamps on Ribbit II.

With a background of tracking and capturing yummy targets around the galaxy for the emperors endless appetite, he put his skills to good use: hunting some game in the deep swamps and starting a small business selling handcrafted luxurious handbags.

The unorthodox method of poaching swamp rodents with his flame thrower resulted in heavily burned pelts and hides, but it turned out a great business success as the dark charred bags were an instant hit on the amphibian black market.

One day an old friend knocked on his door and a plan of vengeance was drawn to find some new allies and clear their names.

▶️"Don't get trapped in the quagmire!"

▶️"We gots to defend our marshes!"

▶️"Time to check the snares!"

▶️"Who you calling a handbag?"

▶️"No more playing around in the pond!"

▶️"Who's talking about knives? Hehe, I got a flamethrower!" - A reference to Crocodile Dundee[2].

▶️"Hey! Who wants a handcrafted critter purse? Might be a bit charred."

▶️"I spent years in the bogs of Ribbit II."

▶️"Poaching's a snap when you carry a trapper's hook like THIS!"

▶️"Meyh! Play with fire, you're gonna get burned!"

▶️"Got enough for another purse now!"

▶️"I'm just draining the swamp. Heheheh..." - A reference to an expression[3] commonly used by American politicians.

▶️"Well, Dundee be damned!" - A reference to Crocodile Dundee.

▶️"No prey is scary enough for me!"

▶️"Hook and line, pelts are mine! Heheheheh..."

▶️"If it weren't for your snazzy plans, we'd still be in prison."

▶️"You sure love it when a plan comes together, eh?"

▶️"Always knew how to make a gator weak in the knees."

▶️"Remember that time I set fire to the warden? Heheheh..."

▶️"We'll all be Smiles once we clear our name, eh?"

▶️"Hands off me winch. You're always messing with me!"

▶️"If you think I'll be gentle on ya, you got the wrong gator."

▶️"Hop along, skippy!" - A reference to Skippy the Bush Kangaroo.[4]

▶️"Hey you! May the flame of your hatred never die."

▶️"Shall I light ya fuse? Heheheheheh..."

▶️"You're all twigs for my bonfire!"

▶️"Crikey! We need a hot defense!"

▶️"Lemme conjure up some Solar. Heheheheh..."

▶️"I've got a wallet burning in me pocket!"

▶️"Bone for me tail armor?"

▶️"Oh, I need some polish for dragon horns."

▶️"Out of the frying pan, into the fiery embrace! Heheheh..."

▶️"I'll be the drake of your dreams!"

▶️"Don't make me have a meltdown!"

▶️"Oops! I got a little careless with me flame spitter safety procedures."

▶️"Got kindled into a ball of fire! Heheheheheh..."

▶️"Surgery was kinda tough on account of me leathery hide!"

▶️"Someone called for an exterminator?"

▶️"They call me pyromancer for a reason!"

▶️"They don't call me pyromancer for nothing!"

▶️"More fuel for the fire!" *Cackles*

▶️"Don't recognize me? It's your old pal! Just a little hotter!"

▶️"This is a warm reunion, friend!"

▶️"Seeing you with the enemy really burns me." 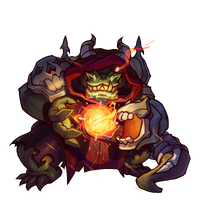 Some crocodiles just want to watch the world burn. Pyromancer Smiles won't settle for that. He has peered into the flames and had visions of him setting all of creation ablaze! He's left the (now scorched) swamps of Ribbit II on a quest to fulfill this dark destiny, and stowed away on the Awesomenauts vessel to visit distant worlds. What's left standing after a battle is incinerated by the Pyromancer, until only ash remains.

He's dark, he's angry, and he's armed with a flamethrower. Don't cross Pyromancer Smiles as he'll burn you to a crisp! The Flames command it!

This DLC contains a custom skin for Smiles in Awesomenauts. You need to have Smiles available as a playable character in order to access the skin in-game. Owning this skin will also unlock the special portrait for use in-game. This skin contains a fully customized voice set. - Official Steam Store description.

This skin gives Smiles a more dragon-like look and wizard garb. He wears team-colored robes, including a hood, has skull-shaped shoulderpads and horns on his head. His eyes have no pupils, his tail has a bone ornaments instead of the metal reinforcement, his flamethrower is shaped like a skull mouth and his gear (trap and winch) are more medieval-looking.

Bush Fire has flaming skulls effects on it, Trapper's Hook has a golden chain instead of the original electric-tether effect and although the animation for [{Tail Whip]] is unchanged, the tail itself looks different as previously mentioned.

Being premium, this skin comes with unique voice-acting.

Showcase starts at 0:47 in the video.