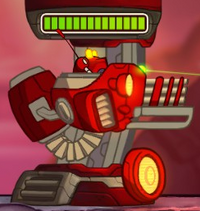 Turrets are structures that are featured on every map, in numbers of either 3 (Sorona, AI Station 404) or 4 (Ribbit IV, AI Station 205, Aiguillon). They protect the Solar Drill and fire bullets at high speeds if any enemy Awesomenauts, Droids, or Creeps come in its line of sight, prioritizing those that are closest to them. Destroying the enemy Turrets is the only way to reach the Solar Drill, thus making them the key to winning the match. Destroying a Turret grants every team member 30 Solar plus 70 additional Solar to the 'Naut that killed it. If a Turret is destroyed by a Droid, it will grant 30 Solar to the Droid's team and 70 Solar to the Awesomenaut who attacked it last. Turrets are invulnerable when not shooting and/or while shooting for 3 seconds without hitting any targets. When a turret stops shooting, there is a 1 second delay before it goes invincible again.