Puzzled by its sudden disappearence, Soviet space-command wondered what had become of their beloved test-pet Yuri. Little did they know that Yuri's spacecraft had entered a warpfield anomaly and was transported hundreds of years into the future!

With the jetpack translating everything Yuri says and does, enemies are never quite sure who is in control, the mad scientist monkey, or the computer it created?

"This is our (awesomenauts) work, if there will be any chance then there will be people and its the best thing... (coundtown)...launch

▶️Yuri: "Hoohoohah!" Computer: "You damn dirty aliens!" - Reference to the movie version of Planet of the Apes[1].

▶️Yuri: "Hoohahahahahe!" Computer: "I expect you to die!" - Reference to the James Bond[2] movie Goldfinger[3].

▶️Yuri: "Hoohoohoo!" Computer:" You will feel the wrath of monkey!"

▶️Yuri: "Hohohohohaha!" Computer: "From Monkey with love!" - Reference to the movie: From Russia with Love[6]. 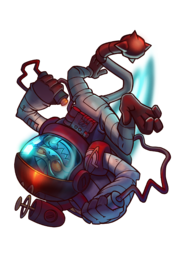 [Transcript from 1959 experimental Sputnik launch, Read with Russian accent] This is Launch control. Cabin atmosphere and pressure stable. Testmonkey is in seat. Ignition sequence starts. 4... 3... 2... 1... Boost. We have lift-off. All tanks pressurized. Tower cleared. Wait minute... Monkey is out of seat. Monkey get back in seat! Yuri!!! - Official Steam Store description.

This skin replaces Yuri's standard clothes with a full spacesuit and helmet. His jetpack's color is also changed to silver. Abilities and the autoattack are unaltered, but the jetpack releases blue flames instead of the normal yellow ones. 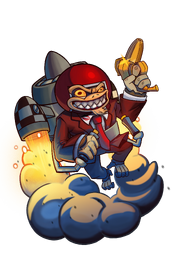 Double-O-Yuri's instructions are implicit. License to kill. From elegant clubrooms to exotic islands, Double-O-Yuri carries out the Secret Simeon Service's dirty work. An action filled adventure of intrigue, treachery and romance. In the world of adventure, the highest number is Double-O-Yuri! - Official Steam Store description.

This skin gives Yuri a suit, helmet and jetpack based on the James Bond movie "Thunderball". Mines from Mine Deploying look different, with more glowing lights on them and a slightly different shape, while Warp Time has the image of the famous gun barrel sequence James Bond movies are most famous for.